A huge thank you to Rebellion Brewery who presented Scannappeal with a £9,000 donation yesterday taking their all-time total raised for the charity to a staggering £300,000. Rebellion Brewery have been supporters of Scannappeal since 2003 and helped raise funds through their biennial charity open weekends with the last event held in 2019 raising £65,000. Unfortunately the 2021 weekend was cancelled due to Covid-19 but Rebellion owners Tim Coombes and Mark Gloyens still wanted to support Scannappeal this year. 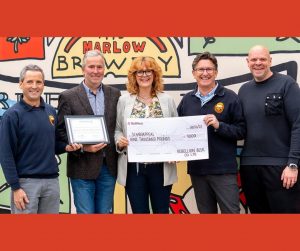 Mark commented “We are delighted to have supported Scannappeal over many years. The equipment purchased with the help of money raised by the brewery has been of such benefit to the local community in times of need, who in turn have been such tremendous supporters of the brewery over the years”.

Thank you to all Rebellion customers and team members for the wonderful support that you have shown the charity over the years. Every £1 raised makes a huge difference to the lives of local patients in our Bucks NHS hospitals.

Roll on 2023 for the next charity weekend!