Do something amazing and make a difference.

By getting involved and choosing to fundraise for Scannappeal  we can continue to improve the lives of patients across Buckinghamshire. Every penny and pound raised will allow us to provide the best possible medical equipment for our local hospitals.

If you have a fundraising idea to run with or need some help to make something happen please get in touch – we are here to help and support. Together we can make fantastic things happen. 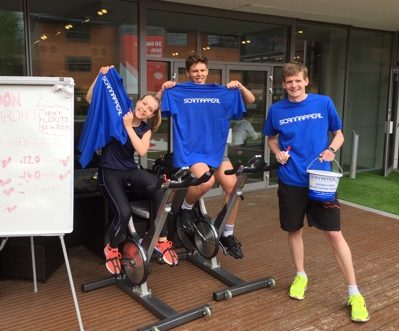 Did you know we raise funds from recycling printer cartridges

Peter Mason set about putting a team together to take part in the Scannappeal Lands’ End to John O’Groats virtual challenge. Such was the support from his running group, Bearbrook Running Club, that he ended up with 19 runners and two teams.

Peter shares his story here “Just before Christmas 2020 I suffered a cardiac arrest in the community. I was fortunate in having with me two companions who were able to give CPR and summon help. I was admitted to Intensive Care, barely alive, but with the help of the hospital staff have made a virtually full recovery. As part of the recovery process I have received several scans and I wanted to help raise money for a more sophisticated scanner which will help save more lives in the future.”

With two teams ready to go, Team ticker and Team Vital Spark, started to record all mileage covered by foot from 1 May and within 10 days Team Ticker were in the lead having already covered 455 miles, Team Vital Spark were just behind on 363 miles. By 18 May Team Ticker had covered the full 874 miles to reach John O’Groats. Team Vital Spark arrived just 48 hours later. Together they have raised over £1,700 which will make a significant difference to our current Cardiac Appeal.

"When I was diagnosed with Cancer in 2010, I was so grateful to Wycombe Hospital where I was given amazing care and support. We have since moved to West Sussex, but I always intended to take part in a special event for Scannappeal to say thank you. In September, our children and I completed the 100k Thames Path Walk. We would like to thank all the kind friends who donated to our Justgiving Page, to raise nearly £1200 for Scannappeal". - Barbara Walmsley