Born into a Jewish family and raised in an East End bombarded by Hitler’s V2s. Fortunate enough to be one of the lucky survivors of the Nazi menace, Jeff was able to play in the streets among the resultant debris with his school mates. Jeff’s family consisted of Nancy, the proverbial domineering Jewish mother, his somewhat naïve father Henry and sister Bernice. Among the wider family circle were numerous quarrelsome aunts, a trio of Communist cousins and the prolifically fertile grandmother Rebeca who lived in a council flat next to a communal rubbish chute. Most of the family were law-abiding citizens, but a few were collared by officialdom, and one by the infamous Krays.

The talk will prove to be lively, told with passion and humour, incorporating a mixture of Jewish and cockney humour and will deliver a vivid account of growing up in the post-war east end.

This popular talk is based on Jeff’s published book – Bagels & Bacon which is described by Fern Britton as ‘a hugely entertaining book…a great sudsy wallow in the 1950s’.

Tickets £15 and includes tea and cake. 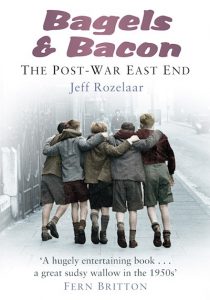